Search for consultants and hospitals
Search

One of the most common questions we are asked at PHIN since 2020 goes something like this; “so, with NHS waiting lists going up, is everyone going private?” A simple enough question, but rarely does a simple question have a neat answer.

Here we take a look at the key trends happening in the sector, as seen from our unique, national dataset. What’s happening in the self-pay market, the procedures and regions experiencing growth, and the impact of the pandemic on public opinions of private healthcare.

This market review looks at the latest available private healthcare data for the 12 months up to the end of September 2021, alongside a national survey from YouGov conducted in March 2022.

Last October we published an analysis of what we saw to be the key trends in private healthcare. With activity gradually recovering from various lockdowns and Covid pressures on hospitals, the second quarter of 2021 (April to June) was strong for the industry. Despite recent media reports suggesting a ‘boom’ for private healthcare, leading to “a two-tier health system”, the private market has actually cooled over the following three months. 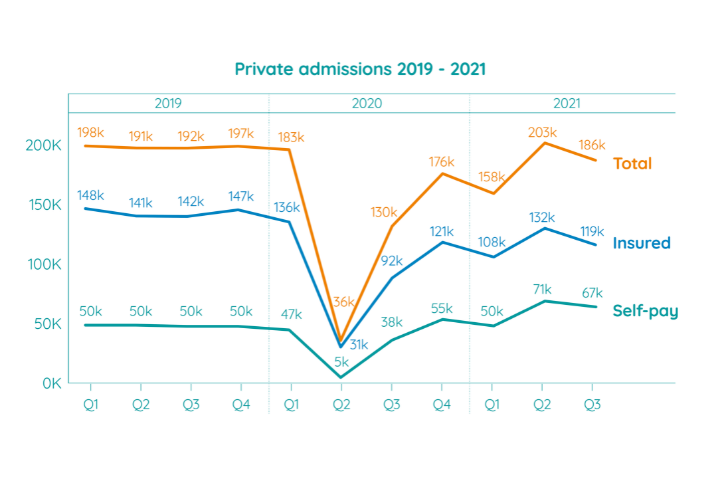 Self-pay is here to stay

While the size of the market remained relatively consistent, we have continued to see changes in how people pay for their private treatment. In particular, people paying directly for their care rather than through insurance continues to become increasingly common.

When comparing July to September across 2019 and 2021 there was an increase in self-pay of 35%, with 67,100 people opting to pay out-of-pocket for private treatment. These are strong signs that the self-pay market is likely to remain buoyant, particularly in the short to medium term.

At the same time, while the number people taking out health insurance has reportedly risen since the beginning of the pandemic, fewer people are actually using private medical insurance to pay for elective treatment. While health insurance continues to be the most common way people pay, the number of patients opting for this route fell for the months July to September in 2021 by 16% compared with 2019. With new policy-holders unable to claim on pre-existing conditions, the decline in this market may be a short-term trend.

When breaking down the trend towards self-pay, some common procedures continue to be driving this growth. People self-financing cataract, hip replacement and knee replacement surgeries are becoming more common. For cataract surgery this has grown to 13,200 patient admissions, up 64% from the same July to September period in 2019. The increase in people paying direct for hip and knee replacements is even more pronounced, rising 165% and 122% respectively in the same period between 2019 and 2021.

With more people reportedly willing to consider private healthcare than before the pandemic, it is likely that for these procedures we are seeing new people enter the market for the first time.

However, given the comparative size of private healthcare compared to the NHS, it’s important not to read too much into these figures from an NHS perspective. While the self-pay market is buoyant, the evidence doesn’t suggest a wide-spread shift from the NHS to private.

Self-pay in the regions 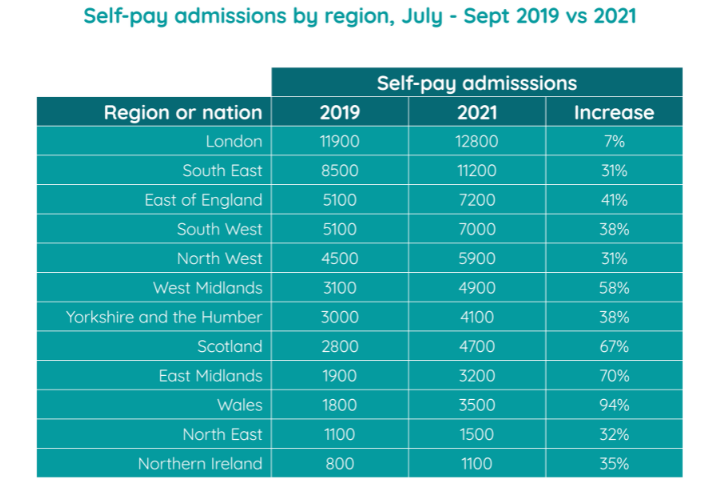 The self-pay market is strongest in London with 12,800 patients self-funding treatment from July to September 2021. However, London is the only region where growth in this market was less than 10%.

During the height of the pandemic there were fewer consultants active in private healthcare, with a low of 1,800 active consultants in April 2020. With much of the independent hospital capacity made available as clean sites for acute NHS patients, the fall in active consultants working privately over this time was inevitable. 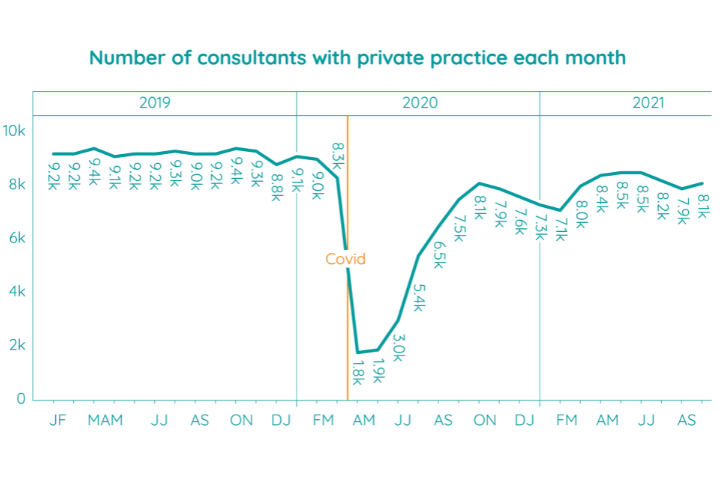 By the Mid-2020 the majority of consultants returned to private practice, with 9,308 providing services between April and September 2020. However, according to the latest available data the number of active consultants is still not back to pre-pandemic levels.

In the six month from April to September 2019 there were 12,617 consultants providing elective care to private patients. In the same period in 2021 that number stood at 10,896 – 14% lower than in 2019. Interestingly, the fall in active consultants over this time didn’t seem to curtail activity – with the second quarter of 2021 actually 5% higher than in 2019.

This may give us some insight into the cooling of the private healthcare market in Quarter 3 2021. While areas of the private market are clearly performing strongly, there is finite resource and capacity. Or, put another way, there are only so many doctors.

Active consultants in your region

Looking at the geographic breakdown, the areas where consultants have been slowest to return to their private practice is the North East and North West, with both areas having around a quarter fewer active consultants than in 2019. In the East Midlands the number of active consultants remained the most stable, with a decrease of 37. London - the region with the most activity – still has 9% fewer consultants in 2021 compared with 2019. 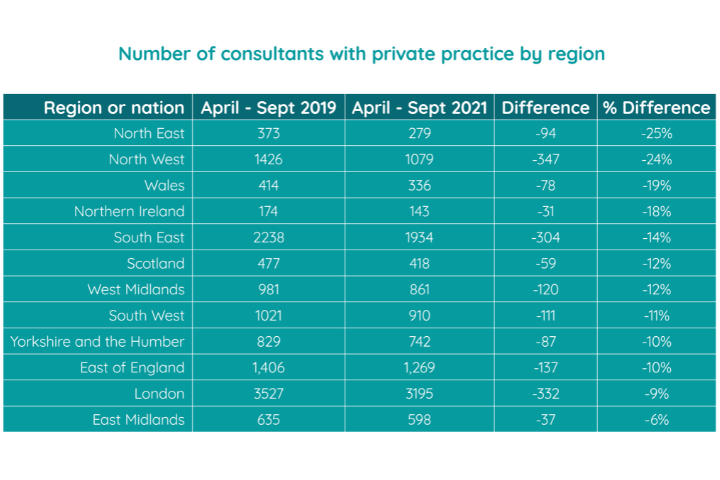 Consultants with private practice by region

In the specialty areas most buoyant – ophthalmology and orthopaedics – the decrease in active consultants in 2021 is less pronounced than in others. However, in these specialties fewer consultants have been performing higher volumes of work compared to before the pandemic.

While there are 88 (9%) fewer ophthalmologists active from April to September in 2021, the number of cataract operations actually increased. There were 20,700 surgeries from July to September last year, up from 15,200 over the same period in 2019. 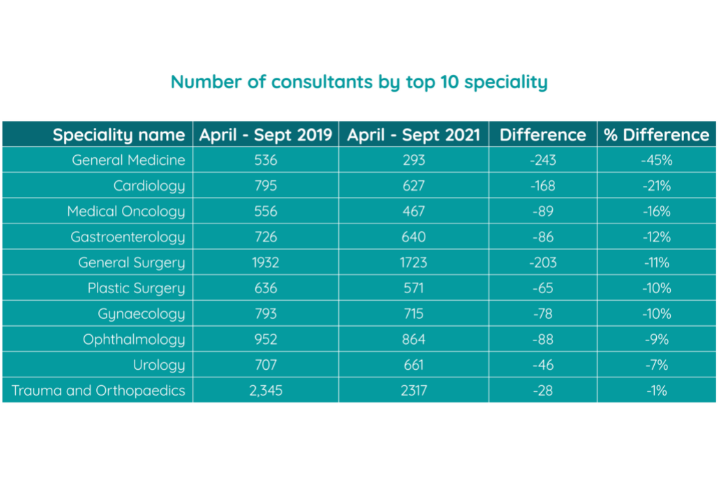 Consultants with private practice by specialty

The specialty with by far the largest fall in active consultants, is in general medicine. For the comparative periods in 2021 and 2019 there has been a decline of more than 45% - in percentage terms this is more than double the decline in cardiology, the next biggest to see a fall.

This may be a reflection of the role general medicine consultants were required to play during the pandemic.

In a survey of 2092 adults across the UK, 19% of respondents indicated that they would be more likely to consider using private healthcare services now as a result of the pandemic. For the same question, 8% said they were less likely, while 67% said the pandemic has made no difference. These answers are fairly consistent with the results from the last survey PHIN and YouGov conducted, showing that while opinions aren’t continuing to change, the shift in attitudes is remaining firm.

Of those indicating they would be more likely to consider using private healthcare, 71% believed they could get access to appointments and treatment faster, while 64% had concerns around NHS waiting lists.

12% of respondents confirmed they had used private healthcare services since the pandemic. Interestingly, of those, 41% stated that they would have used NHS services for this care before the pandemic. This seems to indicate that while we aren’t seeing a shift away from the NHS, there are areas where new patients are entering the private market when they wouldn’t have before.

Elsewhere, concerns around accessing private healthcare continued to persist primarily around costs, with 71% of UK adults citing high costs as a concern.

All survey figures are from YouGov Plc. Total sample size was 2092 adults, of which 393 are more likely to consider using private healthcare now as a result of the pandemic, and 249 had used private healthcare since the pandemic started. Fieldwork was undertaken between 15th - 16th March 2022. The survey was carried out online. The figures have been weighted and are representative of all UK adults (aged 18+)

Activity numbers have been rounded to the nearest 100, while percentage difference have been calculated with original statistics.

*Article originally stated 9,100 people opted to self-fund for cataract surgery during July and September 2019, this has been corrected to 8,100.