Search for consultants and hospitals
Search
Back to homepage

Time to catch up with the women: How awareness is helping to improve men’s health

It’s Men’s Health Month this November – 30 days dedicated to encouraging men to be more aware of their general health and speaking up when something might not seem right. Awareness campaigns such as The Movember Foundation are helping to shine a light on several major health issues that affect men, including two of the most common cancer types: testicular and prostate cancer.

We spoke with urological surgeon and testicular cancer expert, Mr David Thomas, about his advice for men and why nobody should fear speaking up about their health.

For men, prostate cancer is the most common cancer, with around 47,600 cases diagnosed in 2016. Despite the prevalence of prostate cancer, traditionally men have not been as engaged with health promotion and screening as compared to women. Women have always had a close relationship with primary care through contraception, maternity services, children services, cervical and breast screening as well as awareness programs. They develop closer relationships with primary care teams and become better informed about many aspects of disease prevention and awareness.

Typically, men tend to visit the GP only when they have clear symptoms that something is wrong and even then, late on. Most of the information that men receive about their health is either through the media or through word-of-mouth. Thankfully men’s health, and prostate and testicular cancer in particular, are no longer taboo subjects and social media awareness has helped immensely.

Movements such as Men’s Health Month and the Movember Foundation are a really engaging way of starting a conversation and breaking the ice about men’s health, particularly when combined with challenges that help to raise money for research. Celebrities such as Steven Fry and Ian McKellen, who have received treatment for prostate cancer, have helped to raise the profile of men’s health and generate discussion amongst their followers and the public in general.

For many men, their main concerns regarding their health relate to the fear of the unknown, and some of the side effects of cancer treatment. For young men who are diagnosed with testis cancer, the loss of a testicle due to treatment can cause considerable anxiety. Men can be offered sperm banking or placement of an artificial testis according to preference, and they can continue a normal sex life and maintain fertility even after chemotherapy if their sperm is stored in advance.

I recall a young dentist who presented with advanced testis cancer in his early twenties that had spread to his lungs.  He underwent successful surgery and chemotherapy.  I met him by chance in the street 10 years after his treatment with his wife and 2 young children. He looked so well and happy with his young family.  It made my day and I felt lucky to have been part of his care.

In order to ensure testis cancer is diagnosed at an early stage, self-examination is the key.  Men should get to know the feel of their testicles, so any changes can be detected.  The only screening test for testis cancer is self-examination, which should only take one minute every month, preferably after a hot shower or bath when the scrotum is relaxed. If you have a family history of testicular cancer or undescended testicles, you can be more at risk, so pay close attention to self-examination.

With prostate cancer, men with a family history of prostate cancer or men of Afro-Caribbean heritage can be more at risk and could be encouraged to take a PSA screening test. The PSA test, which can be done in a GP surgery, is a blood test used to identify prostate cancer by measuring the level of the protein Prostate-Specific Antigen (PSA) in your blood. I am 57 years old and personally I have my PSA check every year on my birthday. But even amongst urologists, the PSA screening programme is controversial, as it is not 100% accurate and can lead to the diagnosis of clinically insignificant prostate cancer.

Men with newly diagnosed testicular and prostate cancer should know that in most cases the disease is curable and even for the small numbers of cases that are not curable, there are successful treatments which can effectively control the disease for years. In England and Wales 98% of men with newly diagnosed testis cancer are alive 5 years after diagnosis and 85% of men with prostate cancer. There is plenty of support and expertise to tap in to through your GP and specialist nurse. Early diagnosis is the key to successful outcomes – so don’t be shy, get on board, engage with men’s health education. Time to catch up with the women.

Mr David Thomas has been a clinical urologist at the Freeman Hospital in Newcastle since 1997 and is a council member of British Association of Urological Surgeons (BAUS). You find his PHIN profile here. 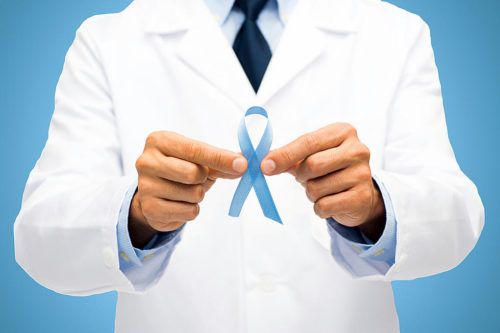